Stride On! Riding A Bike Improves Social Skills In Children!

How does physical play and riding a bike increase social skills in kids? 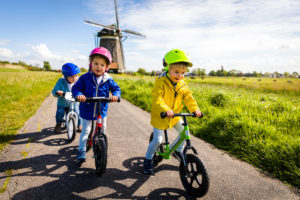 When a child learns how to ride a bike, they gain a whole new set of skills, one of those being confidence, confidence in themselves, but also confidence in social skills.  Kids get more interested in interacting with other kids and excited to “go ride bikes” with each other. For many kids today exercising and play is not as simple as it once was.  Kids are more prone to play video games and stare at tablets by themselves.  Introducing bike riding will open them up to a whole new world, and a world that will best be explored with family and friends.

Social skills are the skills we use every day to interact and communicate with others. They include verbal and non-verbal communication, such as speech, gesture, facial expression, and body language. A person has strong social skills if they have knowledge of how to behave in social situations and understand both written and implied rules when communicating with others.

Play is voluntary engagement in self-motivated activities that are normally associated with pleasure and enjoyment. Play may consist of amusing, pretend or imaginary, constructive, interpersonal (play with others) or intrapersonal (solitary play) interactions. Play is the way that children learn about the environment, their bodies and their place in the world around them. 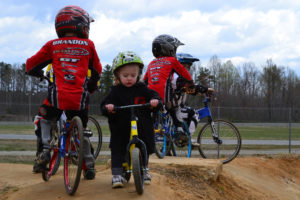 “Free” or unstructured play in early childhood is a way that children learn about their world. Play is also a great way for social skills to develop. As they grow older, children learn about rules by making up games with rules, they also learn about winning and losing and “playing fair”. Kids learn about controlling their impulses in order to do well at something and about space, negotiating and problem-solving. As you can see, play is very important for children. Riding bikes together is a great way for children to play and build social skills they are not even aware of. 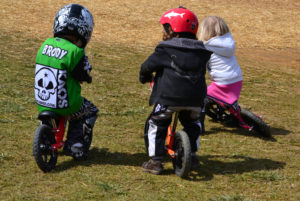 When a child has difficulties with play and social skills you may notice:

Bike riding not only provides a boost in social skills, but it also is a great exercise for not only core and leg muscles, but also children’s brains. It helps improve gross motor skills by working on coordination, endurance, and strengthening. Bike riding also helps with full-body sensory awareness along with visual stimulation. It also helps children with their attention and focusing on the task given to them. 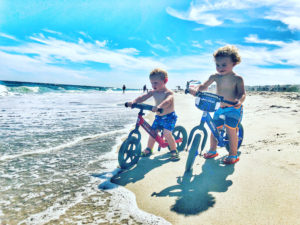 When children ride bikes, they are not just “playing” they are building a strong set of social skills that will serve them well throughout their lives.