The Future of Biking Starts Now For Pinon Hills Elementary 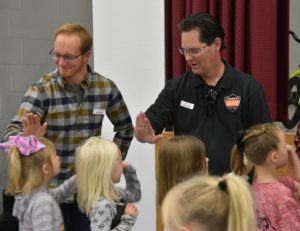 What happens when you are a dad that recognizes the importance of learning to ride a bicycle at a young age and you see a need to share that with an entire community?

Well, if you are a motorcycle enthusiast and editor of Basket Case Magazine you call on some friends and get the All Kids Bike Campaign into your local elementary school.

That is exactly what Josh Sheehan did.  With 3 kids ages 12, 6 and 4 and one more on the way, Josh knew having a program like this would make a direct impact on his own kids, but more importantly wanted this initiative in the school system for other parents to bond with their children.

“I’m trying to keep my kids away from the screens and video games. I’m very heavily involved with motorcycles. My youngest son is involved in racing, and my daughter is just learning.  I see the benefits learning to ride has brought to my children and I wanted to make this program accessible to other parents who don’t know about the resources that All Kids Bike can provide.  By bringing All Kids Bike into the Pinon Elementary School, we will be able to teach kids how to ride safely and build a love for two- wheels, we are also teaching sustainability by getting kids to ride at a younger age.”

Josh reached out to local Nevada companies to help this program along. Virnetx, financially supported the program, while Paughco, a manufacturer of custom and no-longer-available parts for Harley-Davidson Motorcycles were quick to jump on board and help with bicycle assembly for the Pinon Hills Elementary program.  Paughco Vice President Bob Paugh said three of his staff members received the bikes in September and assembled them in about an hour. 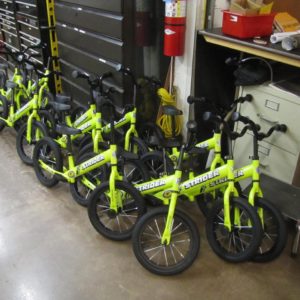 “We’re good friends with Josh and decided Paughco was going to be his company to start this program” Bob said “Just being here today and watching the kids having so much fun with it-it’s good to get the kids out there and have them be motivated into doing stuff physically rather than on the video games and stuff like that.”

Paughco now a third-generation company, began in 1952 and originally moved from North Hollywood, calling the move to Northern Nevada a blessing.

“I think it takes the whole program to another level, and it gives kids something to look forward to at home anyway”, said David Stern, father of two children who attend Pinon Hills. “It’ll get them a lot more excited, and for some kids that have a little bit harder time learning to ride bikes, this makes it a little easier to understand, my son knows how to ride a bike now, but not every child does and not every child has the means to a bike.” 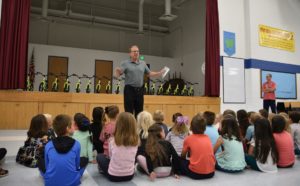 On October 7th school principle Jason Reid drew a curtain back in the school’s multi-purpose room to reveal to students the Strider 14x bikes they will now be using in PE class.  Each student was beaming with excitement at the thought of learning how to ride a bike.  Reid made sure to thank all involved in making this happen for these students including the donor company Virnetx.

Thanks to Sheehan who approached his employer to support the program, he is hoping to see All Kids Bike continue to expand in Northern Nevada.  “I think it’s great for the community,” Sheehan said, “I think it’ s something the parents can get behind. Public schools don’t always get this opportunity. It costs money to have this program, and so to bring other parts of the community in to help with the donations and the assembly of the bikes, it brought the community together a little bit, surrounded them on two wheels. For a guy like me, that’s awesome. Two Wheels has changed my life and I know it’s benefited my kids’ life and that’s for the positive.” 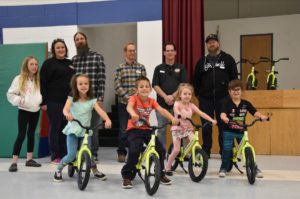 If you are interested in bringing the All Kids Bike Program into your school system, please contact one of our Staff today to get started. The All Kids Bike webpage now has the option for individual schools to build their own fundraising page.